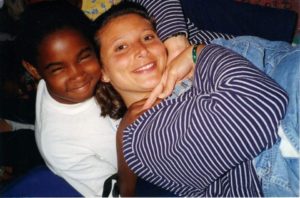 Janet, right, is embraced by former camper Marlena who is now a counselor

In the early 1990’s, Janet Osherow was in college with One Heartland’s founder Neil Willenson. Through volunteer work, they met a young boy named Nile. Nile wanted to attend a traditional summer camp but was denied due to his HIV status. Inspired by Nile’s unique need, Janet and Neil worked together to put on the first year of Camp Heartland. Janet left New York, where she was just beginning a career in TV & Film, and moved to the Midwest. Along with a few dedicated volunteers, she and Neil did everything to make camp happen that first year – making travel plans, registering campers, securing donations, and more. Janet worked for Camp Heartland for 9 more summers. In 2004 she went back to school to become a social worker. She now lives in Washington, DC and works with children and families affected by HIV/AIDS. Every year, her department raises money to send campers to Camp Heartland in Minnesota and Camp Hollywood HEART in California.

Janet decided to change her path once she saw the importance of camp – how it creates acceptance, understanding, and opportunity for kids who need it most. In the beginning of Camp Heartland, many young campers passed away. Despite devastating losses, Janet has been inspired by progress made around HIV/AIDS over the years, including new medications and education of the public. “Back then, for many of the kids, we weren’t even sure if they were going to have a future. To see them now, healthy and happy, some of them parents – it’s been remarkable”.