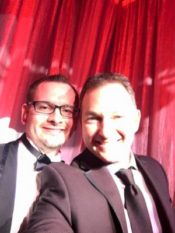 Neil founded the camp after meeting my family and seeing the difficulty it was for HIV+ children to both deal with stigma in their daily life and to have normal childhood experiences like attending summer camp. My brother and I were the first campers to be registered. Neil dubbed me “Mr. Campheartland” (a term that massaged my young ego wonderfully). Thus I became a regular camper throughout my childhood, and also spent many days of my childhood participating in the Journey of Hope program, speaking at businesses, but especially schools and universities all around the country (though mostly in the Midwest). One Heartland was, therefore, a significant part of my childhood, not just in the summer (or the brief winter sessions they used to have), but throughout the year. I also ended up spending many hours at the old Camp office which was located in Milwaukee where I lived.

“It was just something special to say, ‘This camp is ours.'”

It’s hard when you’ve developed literally years of memories to pick one. But I’ll offer briefly a few highlights from my years:
My AP year (when I was 15) was such an emotionally driven session for me. The AP experience was meant to be different from the other camper experiences, which gave it a flavor of something new. Team building was a major theme. We got to go off site in California and camp on the beach. I became extremely attached to one of the girls in the group, she was from Boston and we loved to make fun of each other’s accents (something I still laugh about to this day). She then broke my heart, which was wonderfully characteristic of such an intense teen experience (after all, what is teen-hood without a little angst?). That was probably the best session I had.

The dedication weekend of the Willow River camp was also very special to me. It was I think the last time I got to spend with my friend Chris before he died. And he was such a trouble maker that weekend, he made it memorable! I got to throw out the first pitch at Molitor Field to Paul Molitor. And it was just something special to say, “This camp is ours,” to get to paint on the walls. I loved it.

I also remember one of the first sessions, back when we had candlelight vigils. They were extremely powerful experiences. There was a particular boy who got really worked up, and he was bawling his eyes out, and I remember comforting him. I don’t remember what I said or even what exactly he was sad about, whether it was the thought that he might die or a family member, or missing someone who had died. But I recall late into the night being in a cabin with him, and hearing him just say how important it was to be with him, how much he needed that at that specific moment. It really highlighted the unique support group that we could be for each other at camp.

Lastly, I will say that I have had the immense privilege of being with many great people on the Journey of Hope trail. Through that, I got to hear many fantastic stories from fellow campers, particularly about their life outside of camp. I got to hang out with them, see some of them after they grew up, hear their struggles. My story helped inspire Camp Heartland, but their stories often showed far more than mine how essential a ministry Camp Heartland was to families impacted by HIV.

I am who I am in such a profound way because of One Heartland. A few years ago it occurred to me that I really came out of my social shell through Camp Heartland. It changed who I was everywhere else. At camp, I was outgoing and comedic, and flirty. It took some time for that to happen in the rest of my life. It was, if you will, where I explored and experimented at being me. Nothing may illustrate this better than to be at the camp reunion a few years ago and to see my older brother up on stage with me and another long time camper leading a song. My brother…this macho, stoic, soldier leading people in a camp song. The camp experience brings something out of you that just does not happen normally elsewhere. And for so many of us, we needed that experience.

It also set my life on a path that I can only but confess God had in some mysterious way ordained. Today I am a pastor. If it were not for camp, I’m not even sure I’d still be a Christian. But through Camp I was regularly spending my life talking about hope, that was one of the primary themes that it instilled into me, something I still very much live into, even in the very hopeless experiences we sometimes face in this world. Hope is a central element of my faith, and I really feel One Heartland played a role in that. What is more, I had fallen out of my faith for a brief period after the death of my grandmother. The boy who brought me back was someone I had met at camp, who happened to live in Milwaukee too and we must have exchanged numbers. He called me out of the blue months later and invited me to his church. That act set me on a path that has led me to where I am today. That boy I met at camp would eventually stand as the best man at my wedding. And I love him to death. Additionally, I spent so much of my childhood doing public speaking for the camp, that the elements of ministry such as being a public leader, sermons, relating with people older than me were all things I was much more comfortable with thanks to One Heartland.

But it wasn’t just the ways it changed my life, it was the ways it just let me live it sometimes too that was so important. It was singing silly songs, falling for girls who break your heart, it was climbing walls and dance night. It was boys and girls having fun. It was kids saying “this is the best week of my life” and meaning it. It was Neil’s vision and determination to let me just have the same kind of experiences he did growing up. And it was totally worth it.